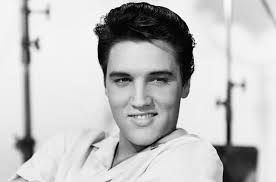 My mother first heard of the news of Elvis’ death via a phone call. After she silently hung-up the phone, she looked at me with glazed over eyes and stated simply, Elvis died. She then proceeded to go into her bedroom and shut the door. She did not emerge for 3 days. After the 3rd day, my dad (who was an unusually patient man, especially when it came to my mother) opened the bedroom door, stuck his head in and said, Hon, it’s not like you knew the man. This one statement was enough to rally my mother for the next 24 hours in order to celebrate my birthday. Once the festivities ended she promptly returned to her room.

To say my mother is an Elvis fan would be like saying the movie Titanic made a few dollars at the box office. My mom currently lives in a lovely two-bedroom home. Actually, it’s a one-bedroom home and a one Elvis-shrine room home. Over the years she has collected everything Elvis; from t-shirts to calendars to movies, puzzles, busts and life-size cardboard cut-outs. Posters, prints and paintings- some black velvet, some not. Every song he’s ever recorded and thanks to her cunning ability to sneak tape-recorders into live concerts, some he has not. In my mother’s will it stipulates that I am to inherit her vast Elvis collection to the exclusion of my brothers because as my mom says, they’re boys, they don’t understand. Little does she know that my husband has already spent countless hours scouring e-bay to see what we might stand to gain after the sale of said items.

My mom does however, own one little slice of Elvis heaven. At the last concert Elvis performed at the Spectrum in Philadelphia before he died, she caught one of his scarves. Apparently at his concerts, Elvis had a guy who stood next to him handing out white autographed scarves – a job that ranks right up there with Vanna White turning letters on Wheel of Fortune. Just how does one get a gig like that? Do you go to your high-school guidance counselor  and ask What do I need to get on my SAT’s in order to be accepted into a good college so that upon graduation I can get a job handing scarves to Elvis? But I digress.

Elvis would take these doled out scarves and rub it around his face and neck a little thereby not only offering up his signature but his make-up and scent as well. I’ve always heard E was a generous guy. These sweaty and stained scarves would then be thrown into the audience. My mom claims she wrestled a guy to the ground for hers, which we all believe because on the handy smuggled-in tape recorder you can hear the ensuing fisticuffs. I won’t repeat the ensuing words.

When my mom came home with hard fought scarf in hand, I don’t think I ever saw her stand more tall or proud., much like a cave man returning to his village with fresh buffalo kill to save the people from starvation. Yay, we’ll survive another winter, the clan shouts with joy. Yay, we have more Elvis chatchki, my father mutters with apathy.

If I had a dollar for every time I heard in my house growing up, Hey, where’s mom? She’s in the bedroom sniffing the Elvis scarf again, then I too could buy Cadillac’s for strangers.

Most moms take great pride and pleasure in teaching their children all they need to know to get by in life. Well, don’t ask me to do long division, conjugate a verb or follow directions on Mapquest. But if you want to know the name of Elvis’ twin brother, his mother’s name or the proper pronunciation of Graceland, then I’m your go-to-gal. (Jesse Garon, Gladys, GRACE-len, in case you were wondering.) Mom, you have taught me well.