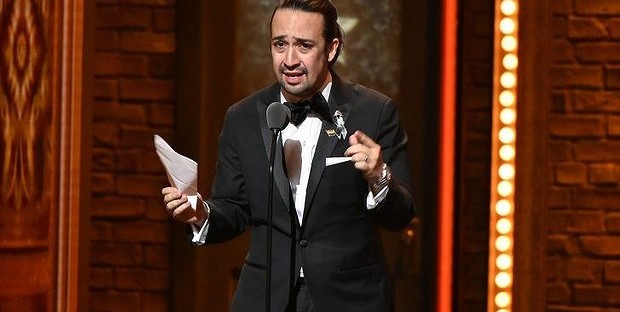 Not to jump on the Lin-Manuel Miranda celebratory bandwagon, but bandwagons are bandwagons for a reason, so I’m-a-jumpin.’ I first became aware of the prolific, impassioned and accomplished Mr. Miranda from his much-too-short arc on the medical drama, House, in which he played Juan ‘Alvie’ Alvarez, the incessantly free-rapping institutionalized roommate of the ever annoyed by free-rapping institutionalized Dr. Gregory House, the titular character played by the inimitable Hugh Laurie.  At the time, I was unaware of Miranda’s 2008 Broadway musical, In the Heights, for which he won his first Tony Award. I was however, keenly aware of his role on a very different short-lived and widely panned medical drama, Do No Harm. If you’ve never heard of this blink-and-you-missed it 2013 mid-season canceled-before-you-knew-it-existed show, consider yourself among the majority. In it, Miranda plays chemist, Dr. Ruben Marcado, which is ironic since in real life he is married to the beautiful Vanessa Nadal, an MIT graduate with a degree in chemical engineering.

While most people don’t even know Do No Harm existed, I for one, shall never forget. Mainly because it is thanks to this debacle of a production that I got to spend an entire afternoon in the presence of the pre-Hamilton hysteria, Lin-Manuel Miranda. Since 2006 I have worked as an extra on over 30 movies and television shows, but it wasn’t until Do No Harm that I was offered my first recurring role, which I’m hoping had nothing to do with its swift cancellation. It might have been a soured show, but it was a pretty sweet gig. The weekly demands placed on me typically consisted of purposefully walking through hospital hallways in comfortable scrubs while clutching important medical files. As fate and high-rising production costs would have it, most of the props on Do No Harm were recycled and repurposed from the Princeton-Plainsboro Teaching Hospital, the fictional medical center in which the intolerant diagnostician Dr. House resided. I even discovered a few discarded House scripts on set, some of which I may or may not have indefinitely borrowed.

But my most memorable day was spent in the presence of the genius that is Lin-Manuel Miranda. The scene takes place in a coffee-shop where Dr. Marcado is busy drowning his sorrows in a strong cup-a-joe, while I hover next to him pretending to partake in witty banter with the barista. For a few memorable hours, I basked in the closeness of Mr. Miranda’s presence. I observed the hyper-kinesthetic nature of Lin-Manuel’s brilliant mind, that never stops working and rarely shuts off. I listened to his hilarious off-the cuff remarks and stood witness to his kindness, graciousness and generosity to the actors, the crew, and me.