I’ve heard it said that holidays are better when there are children to share them with. I couldn’t agree more. But since our youngest is rapidly approaching 16, our days of parenting little ones are behind us. So it is that I treasure Christmas Eve, when our house bursts at the seams with extended family, food, laughter, love and little ones. There is one particular little face that melts my heart. Her name is as unique as she is. Arden has Laura Ingalls’ freckles, cheeks that were built to be pinched and so much twinkle in her Newman-esque eyes that she can get away with just about anything, and she knows it.  The kind of kid who opts to wear a bright pink Japanese kimono on Christmas Eve. She’s also the kind of kid who is not easily fazed, even by Santa himself. My husband is one of 8 children which means I am never in short-supply of brothers-in-law, one of whom could make a career as a photo-double for a Robinson son on Duck Dynasty. He is the definition of the strong, silent type. He’s also not much for crowds and at times will leave a party before it is over. A few short Christmas Eve’s ago he did just that. On that night as the evening was wrapping up for the rest of us, Arden made it clear that she was not yet ready to go home. After much pleading and cajoling her exasperated parents issued the ultimate threat, if we don’t leave now, Santa won’t come to our house. Arden looked at her mom and dad as if they were crazy and informed them that Santa just left. Yup, holidays are most definitely better when shared with children…and Santa.

Ever since our girls were little they have been allowed to open one present on Christmas Eve. And every year it’s the same thing, matching pajamas, or jammies as we call them. Since our oldest turned 27 last April suffice to say, that’s a lot of flannel. But while some may look at the whole ‘matching jammies’ as a fun and frivolous tradition I have come to the sentimental realization that it means so much more than just dressing alike one day out of the year. Christmas day is a laid back event in our home since the night before is spent hosting over 30 family members. We relish every minute of the noise and chaos. But by the next day, when it’s just us, we are happy to simply open presents, indulge in a hearty breakfast, play games, watch movies and finish up last night’s leftovers. All the while never bothering to change out of our newly acquired sleepwear. Unlike the night before, we relish every minute of the peace and calm, because my husband and I know that as our girls get older it’s becoming increasingly difficult to gather all of us to the same place at the same time. Like everyone, our days are consumed by work, school, obligations and the general minutia of daily life. But on Christmas day, as I take mental snapshots of those I love the most I am reminded that no matter how disparate the majority of our time may be spent we are a family, cut from the same cloth. As we begin 2016, I wish you and your family a year of ‘matching jammies’ moments. 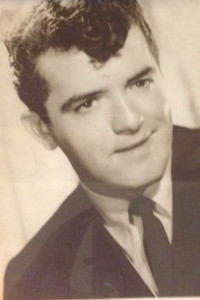 My father-in-law’s headshot for Impala Records

For all you die-hard Frank Sinatra fans you may be aware that among the many songs ole-blue-eyes recorded was one entitled Somewhere in Your Heart. What you may not be aware of is that it was originally recorded by my father-in-law, William O’Keefe McCloskey, aka Bill Martel; Impala Recording Artist. While still in high school and before embarking on a singing career, Bill contracted the polio virus which left him with a noticeable limp. He would sometimes tell people that it was an old war injury, other times he would say he was doing his best Walter Pidgeon impersonation.

In the early 1950’s Bill met and married Barbara Meiris, the beautiful young woman who would become the mother of their 8 children, one of whom I had the good fortune to marry. My father-in-law had a great line in which he used to say, “You know, with a name like McCloskey and eight kids people assume we’re strict Catholics. The truth is, we’re just careless Protestants.”

It was during Bill’s heyday with Impala Records that he was being touted as the next Eddie Fisher. Accolades aside, he realized how difficult it was to actually make a living in the music industry and put his singing career on hold in order to support his ever-growing family. He ended up in the car business, a vocation at which he excelled.

The year my in-laws celebrated their 50th wedding anniversary, we threw a surprise party in which 100 of their closest friends and family were in attendance. The day after the party my father-in-law was waxing nostalgic when he said to me, “You know Rob, I was supposed to be the next Eddie Fisher. But after looking around that room yesterday I wouldn’t trade all the fame and fortune in the world for what I have”.

One month before his 82nd birthday, Bill passed away. I know those of us surrounding his hospital bed that morning had the same collective thought; thank-you dad, for finding a place somewhere in your heart for all of us.

My parents met and fell in love in the late 1950’s. They married young, as their generation tended to do and statistically speaking shouldn’t have lasted more than a year. My dad was 20, my mom 19. He was a practicing Protestant, she was a lapsed Catholic. He was from an intact family, she was a product of divorce. But she thought he looked like Elvis Presley and he thought she looked like Marilyn Monroe, so really, what else did they need? Over the years they somehow managed to remain that rare breed of married couples who not only loved each other, they adored each other. They looked at each other the way Priscilla looked at Elvis, Joe looked at Marilyn, Nancy looked at Ron and Ron looked at Nancy. My dad embraced all my mom’s eccentricities. He knew that Elvis was his competition but he also knew that if push came to shove, Elvis didn’t hold a candle to him in my mom’s eyes. Besides, what were the chances of her ever meeting Elvis, as he used to say? On March 9, 2001 the day before my mom’s 61st birthday, my dad died suddenly and unexpectedly of a heart attack. About a week later, I was checking in on my mom and I asked her how she was doing. This was her heartbreaking response, “A few weeks ago your father and I were talking about how we probably had twenty good years left. We both looked at each other and said, that’s just not enough time. And now, twenty years seems like an eternity.” My mom and dad didn’t have a perfect marriage or a perfect life but they did have a perfect love. All in all, I guess you could say he was her Elvis and she was his Marilyn. 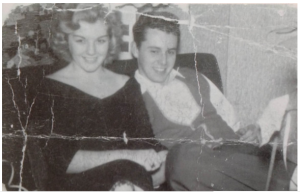 ad found in my dad’s wallet the day he died, hence the fold marks. My mom never knew he carried it with him throughout their 41 year marriage.